No wimps on Jack's field 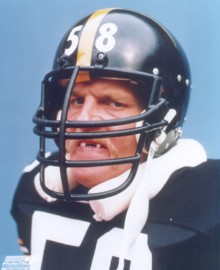 I’m a bike guy. Not much of a fan of any sport involving cheerleaders, balls or bats. But even I watch the Super Bowl. My son insists on it—he sees Super Bowl Sunday as a guaranteed afternoon of hanging out with people and having a table full of snacks.

But damn, this year’s Big Game was dull. Made me long for the old days, when I was a kid in the Midwest and did watch a lot of football. I was a Steelers fan in the glory days: Bradshaw, Bleier, Greene, Harris, Webster, Swann. And this guy. Jack Lambert.

Lambert was a football player. Old school. No bling, no sideways caps, no pretty-boy endorsements, no whining, no pants down around his ass. Just a big, scary guy who liked grinding running backs into the turf. (No, not that synthetic crap. Turf! Dirt. Grass. Remember grass?)

When a player looked across the line of scrimmage and saw Lambert's snarling face behind the defensive line, he knew shit was about to happen.

And it was gonna hurt.

That’s what football needs today. Tough guys with scars, and gaps where their teeth used to be. Fields of grass. Open stadiums that let the snow and rain in.

For those who haven’t guessed, yeah, I’m a little light on bike thoughts today. The temperatures have shot up into the 30s, freezing rain has turned the city into an ice rink and I had my friend Dalton calling from Kentucky yesterday to say, “Hey, man, did you ride today?” It would have been safer than driving but the words "freezing rain" are sort of a de-motivator. I prefer 15 degrees and packed snow, not this wet slop.

I bet Jack Lambert would have ridden in it.
Posted by Tim at 12:05 PM

I'm with you man. I don't watch much in the way of sports but I am a football addict (I guess a little NASCAR too). I have to beef with you about players. They are just as tough now as back in the old days. I think two years ago Stephen Davis (RB for Carolina) played with a broken arm for like 3 or 4 games People play on broken ankles (Donovan McNabb) and legs (Byron Leftwich). It's crazy. As much as I love cycling, you don't see many of those guys riding with injuries. That's all I'm saying.

Then again, I hear she's free.

...only Jack Lambert and Jill.

Good point, TOB. Jill's startin' to scare me almost as much as Lambert did. :)