Reading the news is just getting too stressful lately. Take today, for example. I didn't know whether to be more freaked out because Dumbledore is gay, or because Tanya Tucker's ENTIRE STAGE WARDROBE is in the path of a Southern California wildfire!

I decided to calm myself by sitting back and pondering meaningful things like, "Tanya Tucker is still alive?" And bikes. I always think about bikes 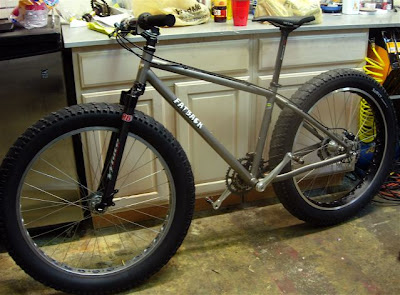 Speaking of bikes—and we should, because this really isn't a blog about washed-up singers of agricultural music—there's a cool new stage of evolution brewing in the world of snow bikes. Unless you're reading this on a public-school computer in Kansas, in which case there's a new intelligent design. (Come to think of it, that actually seems to apply, in this case.)

The guys at Speedway Cycles are building up a new machine of their own. They call it the Fatback. It features a titanium frame with plenty of 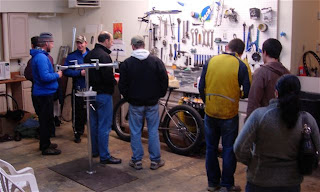 clearance for Endomorphs, and still manages to weigh in at less than 26 pounds as shown above with a carbon fork and some carefully chosen components. This sucker attracted a drooling crowd of bike pervs last Friday evening during a party at the shop.

With a 100 mm bottom-bracket shell and a 165 mm rear hub, they've managed to come up with a bike that not only accommodates a triple up front and a 9-speed in the back with no chain-alignment issues, but it also handles rims at least 80 mm wide (that's 15 mm wider than Surly's Large Marge). They say the rear triangle should be able to handle a 100 mm rim, but they haven't yet gotten their hands on one to test the fit.

hearing for months that such wheels are coming. Large Marges could eventually start to look small, if that's possible.

One of the best features of the Fatback, in my opinion, is the sloping top tube—something I really wish Surly would adopt for the Pugsley. With limited frame options on the Pugs, many of us can't get a perfect fit. When you don't have adequate crotch clearance over the top tube, it's a little unnerving to bail off the saddle and put both feet on soft snow.

The just-built bike shown in these photos will go for $3,500 to $4,000, and they've already sold a few of them. That's not small change, but considering how long the winters last around here, a good snow bike is a solid investment.

I'm cheap, so I'll be sticking with my Pugsley for the foreseeable future, but it's a kick to see what other builders are creating. Between stuff like this and the always cool and attractive FatBikes from Wildfire, winter riding is just going to keep getting more fun. And it's good to see Alaskans pushing the technology forward.
Posted by Tim at 8:34 PM