I think my friend Carlos must have been forbidden from playing violent games or having toy guns as a kid, and the lifelong resentment has manifested itself in 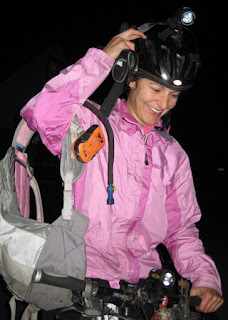 the creation of his very own Weapon of Mass Destruction.

He built it out of rock, mud holes, broken bicycle parts, slippery mud and human blood. The worst part is that it doesn’t actually kill anyone. It just makes mountain bikers wish they were dead.

This year’s edition of the Soggy Bottom 100 included 28 solo riders and—for the first time—three relay teams. Only 15 soloists and two teams managed to endure 110 miles of backcountry trails and 11,000 feet of climbing, but even the survivors arrived back in Hope with destroyed components and trashed bodies. Among the more notable were winner Evan Hyde, who rode the final 10 miles on a flat rear tire, and Mike Vania, who rolled across the finish line with blood spider-webbed across his face from a nasty crash. That gave spectators something to gawk at while they sipped beer on the deck of the Seaview Bar.

Fortunately, Team Sloppy Top Tubes managed to finish the event. We were well behind the two-person team of Rachel Steer and Alex Wilson but they’re actually real athletes, so we can happily live with simply knowing we finished alive and with still-functional bikes. 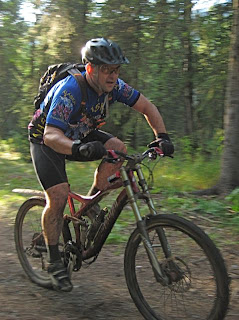 Huber rode a fast second leg from Cooper Landing to Devil’s Pass Trailhead, buying back some of the daylight I stole from Captain Julie when I suffered from the muddy climb out of Hope earlier in the day. Julie then braved the ride back over the pass, and the long, hairy descent through darkness and bear habitat until she reached sea level and rolled to a stop just after midnight.

Some things you do for the after, not for the during. The Soggy is one of those things. It’s far more enjoyable when it’s in the rear-view mirror. My neighbor yelled across the street this evening to ask how my ride had gone. “Miserable,” I yelled back. Yet, I still had a fun weekend.

And the solo riders? Incomprehensible to a hack like me. As much as I love riding those trails, I shudder at the thought of reaching each checkpoint and then having to go back out.

Every solo finisher is a badass.
Posted by Tim at 11:39 PM

You may have renamed the Soggy to the
Badass 110.
rio

Thanks for calling me "Badass".

The last time I was called that was probably back in my 20's after pounding on some hapless dude in a hockey game. You're right, Rio's WMD is definitely one of those events that when you tell people about it, they ask "Why do you do such a thing!?" My answer usually "It feels so good to quit."

Tim, you ARE a badass. I'm 11 years younger and can't come close to hanging with you.

I'm thinking about hanging a poster of you over my bikes as a source of inspiration!

Congrats on surviving as that's my definition of success in this type of event!