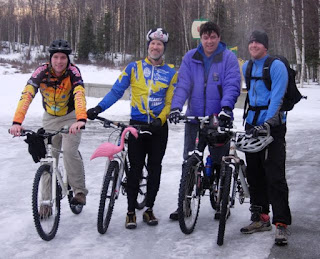 All four finishers of the first Frigid Bits race—
which was won by the guy who proudly displayed
his pink flamingo trophy. (Nov. 2005)
The end of an era is at hand. It’s time to send Tim “The Grillmeister” Kelly off to a new life in Colorado. Friday night’s scavenger hunt will be his final Frigid Bits event (as an Alaska resident anyway).

The idea of The Grillmeister taking part in his final Frigid Bits is a little hard to comprehend. This guy has been around from the beginning. I didn’t know him for the first season or two, because the only time I could get near him on Goose Lake was when he was lapping me and too busy to chat. I mainly knew him as the fast dude with the goofy cowhide helmet cover. 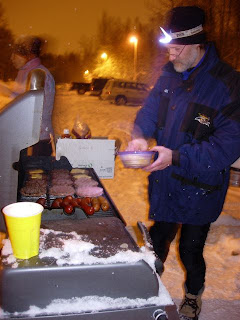 You can't beat The Grillmeister's meat.
But as the Frigid Bits series evolved and we started hanging around after events to drink beer and cook dead animals, Tim emerged as the guy who was always willing to to schlep his big-ass grill across town, cook everybody’s chow, then stand around in sub-zero weather drinking beer and talking about bikes.

Tim’s a true Bike Guy, in the finest sense. He’s been racing for decades, loves every minute he can get on a bike, still rips the legs off riders half his age, and is happy as hell just hanging out with his fellow bike nerds.

The guy’s got passion: 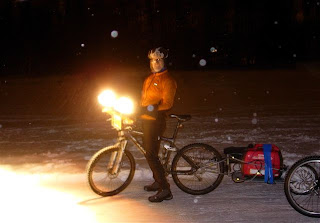 Who wants a tan?
He built the famous—and probably the world’s only—1,500-watt bicycle headlights, and rode 10 laps on Goose Lake while towing the 50-pound generator it took to power the crazy things. 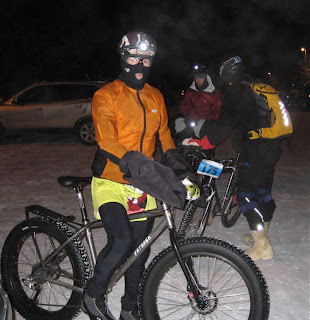 Real men wear boxers. On the outside.
He won the coveted lingerie jaune in a race last year, and still proudly wears those flippin’ Spongebob boxer shorts all over town. I’m pretty sure he’s the only guy to ever walk into the crowded Pioneer Bar and order a beer while wearing his boxer shorts over tights. At the 2008 Soggy Bottom finish line.
When I met him on the trail during this year’s Soggy Bottom 100, he was miles ahead, speeding north as I slogged my way south toward the checkpoint in Cooper Landing, and Tim damn near took a disastrous header because he was yelling my name and trying to give me a high-speed high five as we passed going opposite directions.

To me, that was a great example of why mountain bikers will always be cooler than roadies—a fast guy at the front can be happy to see and cheer for a friend who’s suffering off the back.

Guys like The Grillmeister make the local bike scene a better place. The Frigid Bits series won’t be the same without him.

It’s gonna be weird to pull into the parking lot on Saturday nights and not see that cowhide helmet cover.
Posted by Tim at 7:54 PM

Email ThisBlogThis!Share to TwitterShare to FacebookShare to Pinterest
Labels: Grillmeister

Thanks for the tribute. It comes as quite a surprise. I think the best thing about it is that it makes me realize that through no intention I've made quite an impression on you and I'm sure other riders around town, hopefully positive.

I've always said; "If it has to be fun, but hard - if not I don't want to do it". My definition of what's fun and hard has escalated over the years. As I've done harder and harder events as the years go by the tuoghness been balanced by my attitude that if I'm out there suffering longer then it must obviously be more fun. That's what keeps me going.

It's only riders like yourself that are passionate enough about bikes, such as commuters, Frigid Bit-ers, endurance event participants etc. that share that common mentality (sometimes mental) that can understand what we are all about, without even questioning why we do what we do. For us it's always understood. Outsiders will never know or understand why it's so important.

See you on Halloween. I can't wait to see Manny in Sarah Palin Drag!

I only met Tim once at a frigid bits race. The only one I've been able to drag my butt to so far. I'm going to miss him all the same.

That was so well written, I think I'm going to miss Tim as well. And I've never met him and don't live in Alaska.