Slippery? I have my Redoubts, missy. 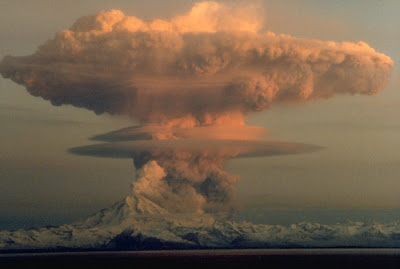 Everyone in Anchorage this week is stocking up on respirators and whatever else you’re supposed to buy before a volcano erupts, because those smart-ashes over at AVO are telling us Redoubt is about to blow. This could be sort of cool if it waits until the weather clears, because we can easily see this sucker from right here in town.

Of course, it could also be a major pain in the ass, because volcanic ash is not very nice to things like computers, cars and airplanes. So as news of the impending eruption started spreading across the nation, one of my brothers sent me an e-mail asking what volcanic ash does to bicycles.

From what I understand, it’s so abrasive that it pretty much eats any moving parts it gets into, but I figure a couple of drivetrain components are cheaper than a new Toyota engine, so as long as it doesn’t get too bad, why not keep riding if I have to go somewhere (providing I can keep it out of my eyes and lungs)?

But my wife’s co-workers who were here for the last ashfall in Anchorage have warned her that the ash is also slippery, so the hospital where they all work should expect to see more victims of falls.

Slippery? Really? The stuff is sort of like sand, isn’t it? The whole thing leaves me scratching my head.

What does one ride to an eruption? Studs, or Endomorphs?
Posted by Tim at 9:40 PM

Email ThisBlogThis!Share to TwitterShare to FacebookShare to Pinterest
Labels: volcano

She might be right about it being slippery. It's not so much like sand as it is like talcum powder. It causes so much damage because of how fine it is which allows it to get into everything and once there grind away. I'll look forward to volcano reports!

As for tires, how about some asbestos ones?

What does one ride to an eruption? Studs, or Endomorphs?

ROTFL, is all I can say.

My vote goes for the Endos. I bet they would be good in fine particles like ash, or even Lunar dust...

When Spurr erupted in the summer of 94, I think that's correct, I was doing my best to try and ride to work every day for a whole year. I never reached that goal. I usually ended up having a few sicks and injury days that prevented that from happening. My best was one year I made it to work on two wheels all but 4 days.

In any case I wasn't going to let a little old volcano eruption slow me down. I didn't ride while the ash was falling as it came down in the evening. But the next day I donned a dust mask and my goggles that I use sometimes when woodworking. It was really cool riding down the trail making ash tracks on the way to work. It was interesting to note the number of people that didn't even show at work, because of fear of some catastrophic failure to their autos or their bodies. Of course it was the same old crap; "I can't believe you rode to work today." I'd just say, "Well you drove, why wouldn't I ride?".

It didn't seem to have much effect on the bike. If it's mixed in with the snow and you get it all over everything, then your best bet is to hose it down before wiping it off, because the ash is like super fine 1000 grit sandpaper. I'm actually looking forward to a little mini disaster. They teach us to be prepared, how to deal with it, forget it and then get on with it. No big deal. I love it when it freaks out the doomsayers like the Y2Kers. That's what gets me ROTFL.

As for tires I would just use what every the normal winter conditions call for. If the ash is more than an inch thick, I'm not sure about riding in it at all. Back in 94 it was only 1/2 inch. No big deal.

After Spur I was finding volcano dust in all kind of nooks and crannies on my bike for the next two years, the rear hub died a tad sooner then it should have. That stuff can be nasty

I'm more concerned about 1000 grit sandpaper in my personal nooks and crannies.