The weather dudes are predicting our first snow of the season tonight, so I just came up from the garage after installing the wheelset with studded tire 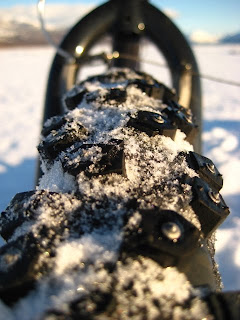 s. After I sat down with the ol’ laptop, I found one of the signs of early winter on Craiglist—homemade studs for sale on Craigslist. They’re typically made with screws from a hardware store, and almost always have only a tiny fraction of the number of studs they’d need to have any chance of working decently.

I understand the desire to attempt this hopeless stunt. I studded my own tires my first winter in Alaska. I spent most of a weekend sitting on a stool, twisting dozens of screws through a perfectly good set of knobby tires. I even did it by hand, because I didn’t have a power drill. I guess it’s just a stage that winter bikers have to go through in their early years. Doing it yourself seems frugal and self-reliant.

It’s goddamned stupid, is what it is.

Those tires sucked. I’m lucky I got through that first winter without sliding under the wheels of a car. And all the other homemade studded tires I’ve seen? They sucked, too. After a few years in Alaska, I “upgraded” to a pair of inexpensive—but manufactured—studded tires. In a way, they sucked even more, because I was fooled into thinking I could trust them. And I could, until about the fourth week, when sections of dry pavement had filed the soft studs into useless nubs that sent me slamming into the ground every time I hit glare ice. I'd had more than enough when I spent eight weeks with what was likely a broken elbow.

I finally broke down and invested in a pair of Nokian Extremes, thinking they’d be a bargain if they kept me out of the emergency room. Soon, I realized that riding on ice was fun instead of terrifying. Quality, long-lasting studs ... and a shit ton of ’em. Those suckers have nearly 300 knobs per tire, and every stinkin’ one has a stud in it. They make for a heavy tire that’s worth every gram.

Now I wince when I look at the homemade studded tires for sale on Craigslist, and feel bad for the people about to buy and try them.

I hope they survive their experiments, and later discover the wonders of Nokians and Schwalbes, instead of deciding that riding on ice is as maniacal as it looks.
Posted by Tim at 9:18 PM

With 25 years of winter riding experience I can attest to the truth of your post. I too wasted tons of time studding my own tires. Riding everyday they wouldn't even last half the winter. So with the advent of manufactured studs it was a no brainer to switch. Don't buy cheap ones that's my only advice. So far the best I've rode on are the Schwalbe Ice Spiker Pros with 361 studs per tire. They have Wolfram Carbide studs which is even harder than Tungsten Carbide. They bite into glare ice like Goathead thorns bite into my tires.

For this reason it will be a relief to not be at the shop this fall as the diy people ignore my advice or wonder why they don't carry the $50 steel-studded tires. I'm glad I have my Nokian 336es on my SnoCat rims. Worth every penny to have that level of confidence on the glare ice. So much better than my first studs: IRC Blizzards, gosh, over 10 years ago!

Don't forget the screws in the shoes, Tim. Wouldn't want to break your hip or pull something!

I absolutely love my Nokian Extremes and wouldn't think of riding in the winter without them.

I would like to thank you for going through the trial and error of bad studded tires for me. Because of you I never had to go through that pain. Before I even thought about anything else, I was smart enough to ask you for your advice (which came with your opinions) and went over and got the good studded tires right away.
They have saved my ass many times, including one moose incident last year that involved him slipping across the icy road at me.
So thank you Tim, thank you for your sacrifice.

Amber, just remember my sacrifice the next time you're mentioning how Monkee was the guy who offered up his saddle when yours broke and I was standing there thinking, "Whoa. Bummer."

not always an option in low-snow years... I use the shortest sheet-metal screws I can find. Certain injuries I don't want to repeat!

Good post...makes me feel better about my tire purchase last winter. I had some guys saying, "You know, we can just make some in your garage...".

I think posts I found here years ago were the influence that steered me away from any homemade job toward Nokians.

I've had Nokian and Schwalbe studded tires and have had many a safe passage on them. I never had the patience for studding my own.