When is someone going to develop a battery that won't turn to crap every time it gets good and cold? I mean, seriously, with all the technological improvements we've seen 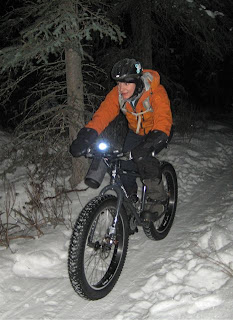 in winter riding over the past couple of years, I think batteries are one of the main pieces of gear that still need improvement.

Tonight's ride was in temps of about 4F ... from what I could tell. I had to hold my digital thermometer at just the right angle to get a reading off the LED screen as the battery faded.

The NightRider light on my handlebar did it's job for more than two hours, and was still working when we got back to the cars, but the power indicator turned red less than an hour into the ride, even though the battery was fully charged for a three-hour burn.

But my camera presents one of my main frustrations in temps below 20F. Despite numerous attempts, I got a grand total of one image from the trail tonight—the one you see on this post—and I didn't know if I had it until I got home. As soon as I took the shot, the battery wheezed under the load of saving the digital image and the screen on my camera went dark except for the "change battery pack" message.

After wrapping my hand around the camera (while still inside my pocket) for a couple of minutes, I managed to get a couple of shots in the parking lot at the end of the ride, but just barely.

Battery companies of the world, get your shit together and give us better products. Much of the world is cold this time of year, and not everyone sits inside catatonically staring at new episodes of "Lost" every night.

Is it really too much to ask for a battery that can function for a couple of hours at 0F?
Posted by Tim at 10:30 PM

I live up here in Minnesota. Last year, I built up a Pugsley front wheel using a Schmidt Dynamo hub. Granted, it's only 100 mm wide so I use the 100 mm fork. I run a Supernova E3 triple LED which puts out a ton of light.

Light when you need it with no battery issues and it works at sub zero temps.

I know of people using the same hub, and it's not a bad idea for powering a bike light. Problem is, there's other gear that I still want to use in cold weather, and that stuff is powered by batteries.

Hmmm, maybe a cable that connects the hub to the camera... but you don't want to buy a new hub... or do you??

Maybe put some chemical toe warmers into your camera bag? I've had this same problem, but typically if it's that cold, I don't want to take off my mitts to work the camera anyway, though it does help if I shut off the display screen.

Have you gone to Batteries+?

I buy chemical warmers by the box. I usually toss one in the top pocket of my pack so my electronics and shot blocks stay not frozen. The newerish Night Rider LED lights are nice because the batteries will fit inside a Poagie. There they will stay at a happy operating temperature. I had a Hope Vision light and loved it, unfortunately I never got more than 45 minutes out of it once it hit -10F. Had to sell it to someone in Anchorage ;)

In general battery manufacturers are looking for lighter and lighter. The way the chemistry shakes out, those of us in northern climates are ....well...just left out in the cold.

Ya I have the same issue on my Pug rides - especially at -37 deg c!

I can put my camera inside my jacket close to my skin...but that makes it hard to get to when I want to use it.

Unfortunately the small batteries they use in modern digi cams just don't have enough juice to work in the cold.