Cruising down the South Fork Rim Trail late Tuesday evening, Jules, the Bike Monkee and I were making a lot of noise while trying to avoid a bear encounter. 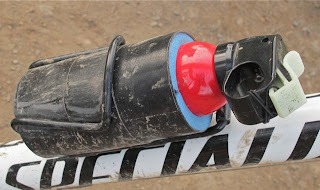 Still, I can’t say it came as a huge surprise to have one anyway. As bear turf goes, that’s a pretty busy neighborhood.

I rounded a corner and saw the Monkee pulling himself off the ground up at the next curve, then backing up slowly as he held his arms out, trying to look as large as possible.

“Bear?” I asked quickly as I stopped my bike.

“Yeah, “ he said, still looking around the corner. “Three.”

I pulled a canister of pepper spray from the bottle cage on my bike, and took a few steps toward him, which was enough to give me a view around the vegetation next to the bike he had ditched while avoiding a near-collision and the resulting bear charge. The view was a tad unnerving—a few feet from his bike stood a couple of one- or two-year-old cubs and the ass end of a brown bear sow that was starting to move her offspring into the woods. They crunched through the brush to our right for a couple of minutes as we considered how to retrieve Monkee’s bike and get the hell out of there.

That was the second time in about five weeks that I’ve been close enough to a grizzly to pull out the spray and take off the safety clip.

I often think that Alaska mountain bikers are relaxed enough to ride here only because we convince ourselves there isn’t a bear around the next corner.

But sometimes, there is.

And that’s when a can of Counter Assault is worth its weight in gold.
Posted by Tim at 10:21 PM

Holy Christ!!! I think I would have messed my pants big time. I almost got run over by a very large buck about a month ago and that scared the shit out of me.

Debbie, let's just say that if those bushes had been well trimmed, Monkee might have seen those bears sooner.