One of the greatest things about bike commuting in Anchorage is the daily opportunity to see wildlife. 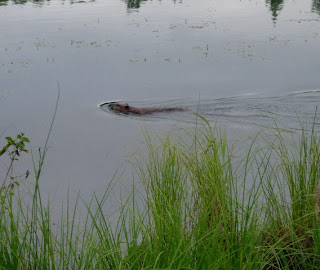 For the past three weeks, I’ve been making regular morning stops to check out this beaver. I finally decided to shoot a couple of photos and post them on the blog, because a friend once told me that he thinks it’s the duty of everyone who owns a digital camera to take some nice beaver shots and post them on the Internet for him to enjoy.

I had no idea he was so into animals, but you know men—we’re always trying to conceal our sensitive side.

This particular beaver is usually in a creek that’s close to my office, but this morning I found it in a nearby lake after a fellow bike commuter with a big smile on his face saw me looking in the usual spot and said, “Man, the beaver’s really out this morning!”

I pulled off my path and hid by a big, thick bush to snap a few photos. About that time, the beaver’s morning dip had reached its

climax, so the furry little thing politely climbed out and prepared to leave. As it crossed the bike trail on its way home, I heard a voice saying, “Whut the hay-ull?!”

I turned around and saw a man on a bike. He had hit the brakes and was trying to decide what to do next. This poor guy sounded like he had just moved here from Dallas and had never seen a beaver. Especially one that was dripping wet early in the morning.

The beaver continued on its way. Knowing I had several good beaver shots stored in my camera, I mounted my bike and happily rode away.

Email ThisBlogThis!Share to TwitterShare to FacebookShare to Pinterest
Labels: beaver

Oh geez...you're gonna get a ton of hits today with keywords like that!

Here and there said...

At first I thought this was going to be a Vonnegut tribute (from Breakfast of Champions) but then I discovered it's just more bestiality.

I looked and looked, but could never find the beaver shots you were talking about. I'd be careful though, lurking in the bush with your camera, that is. The headlines will read "Man in the Bush caught shooting beavers."