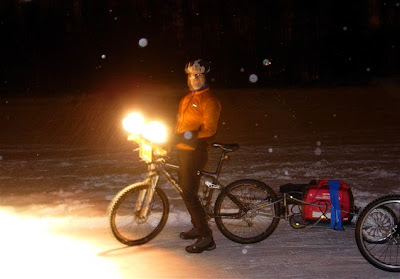 I've heard the rest of the nation spent the night watching some freakin' football game, but for anyone into the Anchorage winter riding scene, the last Saturday of the month can mean only one thing: Frigid Bits Tailgater. 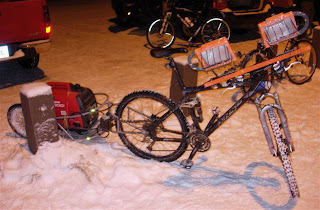 This time it was back to the roots of the Frigid Bits series—racing criterium laps on Goose Lake—and Tim "The Grillmeister" Kelly's trusty NRS was the star of this show with 1,000 watts of face-melting, skin-tanning, little-ol'-lady-scaring halogen brilliance. He cooked up this contraption in his home shop a couple of weeks ago, and it was so cool, it just had to be part of a Frigid Bits event.

Tim provided the legs and lights, and I provided the 50-pound Honda generator for him to drag around the lake for five laps while he looked like a 737 on final approach to The Te 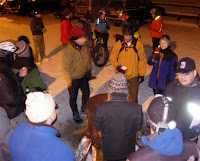 Along about my fourth lap, I found myself staring down The Grillmeister's twin 500-watt lamps as we went head-to-head on adjacent turns. Those suckers were so bright that, for a second there, I thought my overworked heart had finally exploded and I was "moving toward the light."

After the race, it was time for beer and bullshit by the burn barrel. This is the good stuff.

I tried to talk the wife into moving our wedding reception to goose lake, no luck

I wish I had been in Anchorage for this event but would really like to have those lights for the parts of my commute that go through the seedy part of town!

That wattage is off the hook!!!

Looks pretty cold over there in US, I haven't seen anything like that before. Looks an interesting ride

The light photo is too good of a photo not to share. May I plop the photo on my blog along with teaser wording and then a link to your blog?