The first two Finger Photos are in! Inspired by my recent post about friends who sometimes can't resist flipping the bird when they see my camera, other friends and readers of the blog decided it was only fair that they get to give me The Finger, too. (Hey, they've been reading this thing for a long time, so they've been waiting for a chance like this.) 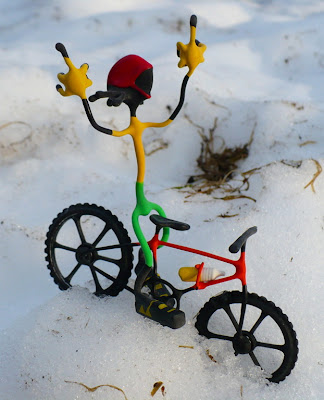 The Grillmeister exercised a little modesty (and this is a man who rides all over Anchorage wearing Spongebob Squarepants underwear on the outside) by declining to deploy his own fingers. He posed his Joe Bender dude in the snow, when we still had some. 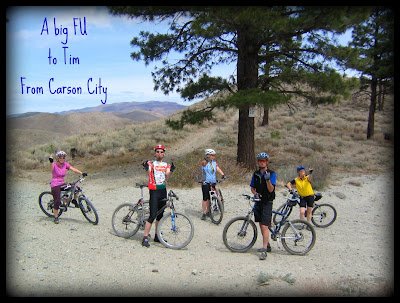 Jeff and the rest of the crew over at Bike Carson took it all the way and gave me The Finger en masse all the way from Nevada. Seriously, click on the pic for a larger version, because it's a thing of beauty. Never before have I been Fingered by so many from so far. It brings a tear to my eye, I'm tellin' ya.

That's just Finger Flippin' hilarious. Tim, you have such good friends. That they should take some time while out on a ride to send such a personal greeting is quite amazing. What's next? I'd like to see some more fingers from far off lands.