At -12F, my front wheel looked like it was steaming. In the soft, ambient light reflected off the trail, thousands of sugary snow crystals were briefly sticking to the tire and then blowing away in a delicate shroud that wrapped itself around four inches of spinning rubber as Tony, 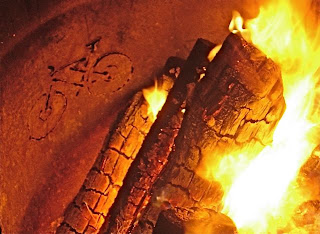 Steve and I rolled up Rover’s Run.

I turned and steered down Moose Meadow, then picked up speed, ducking under snow-laden branches and carving through turns on the packed, sticky surface of the trail. The moon shined bright enough to light up the forest. We had already seen skiers materializing out of the darkness, running without headlamps to enjoy the natural light, but the trails were mostly empty. Only the truly devoted had ventured out.

Tony rolled up behind me when we reached Viewpoint Trail, where we saw the lights of another rider rolling toward us—it was Oscar, riding from home to pick up the crew and join us back at the burn barrel. A short distance later, we found Jeff, a new transplant from Fairbanks who had four cans of beer strapped to his rear rack because he knew about our ride and figured he’d find us sooner or later. And if he hadn’t, at least he’d have something to drink.

We aimed our fat bikes north on the Tour trail, gaining speed and eventually catching Steve, who had turned back earlier. The front of my jacket covered in frost from my breath, the moon still glowing, our tires crunching on the trail, bottles of beer clinking in Oscar’s panniers—it was a fine winter biking moment that brought out the biggest smile my face could manage while encased in an icy beard.

As we rolled up to the roaring fire back at the parking lot, Rio put a big bottle of Panty Peeler ale in my gloved hand. And it was good.

That sounds awesome! There is something satisfying about braving the coldest and harshest weather. Wish I would have come!

Your description of winter riding in Alaska *almost* makes me want to move there.

That is an awesome photo. I like the stamp of the bike on your burn barrel. How did you manage to get that?

First I thought it was photoshopped in but decided it was too much work. Now I'm left with the conclusion that your winter riding group is so organized that you have your own barrel that you take out to your rides.

Steve, the beloved FBBB is a fine piece of craftsmanship from the nimble hands and hot cutting torch of Greg Matyas: a kick-ass bike racer, owner of Speedway Cycles, and maker of the Fatback snow bike.