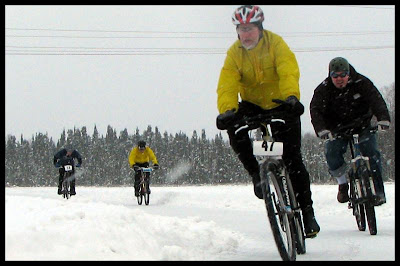 My friend Manny shot a bunch of nice photos at Saturday's Stud Slutz Criterium on Goose Lake. But this one was my favorite, because it shows another friend, Rob, out there riding on behalf of the denim industry and old-school mountain biking.

Check him out there on the right side of the photo. Rob's rockin' his work gloves, his Merrell mocs, and some blue jeans with one leg rolled up to keep his pants out of the drivetrain. He seems to have forgotten his race number. If I know Rob, he probably showed up just as the race was starting, and was too busy assembling his bike to bother with details.

A few years ago, Rob and I made up half of Team Megasorass in the 24 Hours of Kincaid. When we decided to hold a team "training ride" that spring, Rob arrived with his wife's bike, put tires on it in my garage, then did the ride wearing sandals and using platform pedals.

The guy's no gear snob. He's just a bike junkie with a wicked sense of humor. He's a reminder of what mountain biking is—or at least used to be—really about. And that's a fine thing to be these days, when the Frigid Bits field contains a smattering of local team jerseys.

Not that there's anything wrong with being a sponsored rider, but I don't remember ever seeing someone show up in team kit and then hanging around for a post-race tailgate party. Those guys probably have to hurry home to drink Cytomax and upload their heart-rate data to spreadsheets.

As far as I'm concerned, anyone who shows up wearing colors should have to buy beer for everyone else.

And there should always be some guys like Rob around to drink it.
Posted by Tim at 9:50 PM

I second the motion to have those that show up in team kit buy a beer to the rest. That and those in team kit should do no less than three shots of tequila prior to the race.

Yep good to see Rob there - think I haven't seen him since I DNF'd a Soggy a couple years ago.

Does wear SpongeBob SquarePants boxers count as wearing a "team kit". When I make it back to Anchor Town this week, if there's an event while I'm there I'll be sure to wear my Flash "kit" from the Halloween Scavenger ride. That way others may buy me a beer because they'll feel sorry for me knowing that I can't afford a real "team kit". See you this weekend.

The Spongebob kit is the opposite of a team kit. Spongebob makes the statement that you have a sense of humor and don't take yourself too seriously.

When do you get back to town, GM?

LOL @ uploading heart rate data. So true, and so uptight!

I'll be back tomorrow morning, if my standby connecting flight doesn't fill up. Otherwise I'm not sure. I'm sure I will definitely be there by this weekend. It will be time to roll out the Fatback. See you then. Don't forget I'm counting on you to give me a personal guided tour of the new STA trails on the Hillside.

Several years ago I used to be a sports reporter based in Anchorage, and one of my annual events to cover was the Iditasport for Velo News magazine. The race was starting to draw international racers, and one year there were racers from Italy, Spain, Canada, Japan and other countries. Some of these foreign racers arrived complete with a media crew to film them racing for their sponsors.

I weigh about 330 pounds, have asthma and I'm a low-tech rider, usually wearing Dockers, trail shoes, a rain jacket and not much else. But I'd bring my old freebie Shogun mountain bike to races so I could get a ride in, even if I didn't compete.

Anyway, with the Iditasport Extreme (the 350-mile race from Knik to McGrath), there used to be a mandatory overnight about 20 miles into the course on the Susitna River so race officials could make sure the riders could handle Alaska's winter weather. After shooting pictures of the race start in Knik, I threw my bike and camera in the back of the Bronco and hightailed it over to the end of Big Lake, where I knew I could cut about half the distance off the trail to the overnight.

So here's this asthmatic football-lineman-gone-to-seed riding a 20-year-old bike (with full backpack and drinking a can of partially frozen Diet Coke) down the trail, passing some of the Italian techno-weenies with the film crew on the way to the overnight. I think the Italian riders quit the race after I passed them. Wimps.