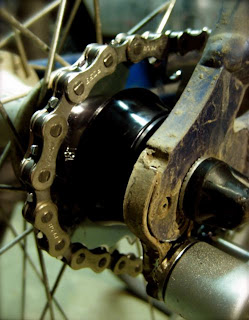 When rubber meets dirt, I’ll be twisting the Grip Shifts every time.
Posted by Tim at 8:17 PM

Grip shifts, really? I would have thought you pulled triggers.

I was with you all the way until you finished with twisting the GS... ;o) Actually, I figure, ride what you want, when you want and how you want!

I agree, No.T. Having a singlespeed in the stable gives me one simple bike to ride on errands & nothing beats it on a rainy day... full fenders, baby!

As for the Grip Shift, I'm with you. I love the precision of sram. I've noticed that most people who don't like grip shift have never used it... or at least not in the last 8-10 years...

sent from my Windows PC

gk - ha! I recently stopped working at an lbs (how geeky, it's the abbr. for pounds). I sometimes called the shimano stuff "crapidfire." Not in front of customers, of course.

Interesting that you use windows...

P.S. Offroad this, year, it's been all SS, so the SRAM/Shimano debate is kinda moot for me--but fun nonetheless! ;o)