I've been getting my Pugsley ready for its first full winter, which really just means I installed a new handlebar and put some air in the tires. I did, however, need a better light for nocturnal trail rides, and about 10 days ago I f 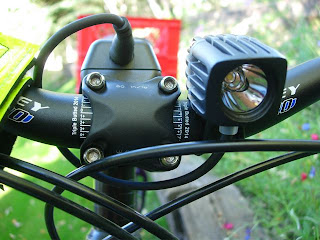 Is there anything better than finding insane deals on bike stuff?

Of course not. It was a rhetorical question. If you found yourself answering with anything not along the lines of, "Oh hell no!" go stab your own knee with a fork.

Anyway, I was walking through the local REI store checking out the big fall sale when I looked in the glass case full of fancy bike lights and saw last year's NightRider MiNewt on sale. It's being replaced by a second-generation light, but the first version is still ... well, light years ahead of all my old stuff. By the time they applied the 20-percent discount offered to members on a single item, I was snatching last year's $160 light for about 85 bucks.

This happened only a couple of days after I had ridden Johnson Pass and found myself longing for a Camelbak large enough to carry more food. My M.U.L.E. just couldn't carry as many calories—or as much water—as John's H.A.W.G.

This left me wondering two things: 1) Should I blow a hundred bucks on another Camelbak, and 2) what the hell do the acronyms M.U.L.E. and H.A.W.G. stand for?

Whatever. My wife and I walked out of REI that day with my new light, and then she wanted to step into a nearby outdoor-clothing store that I rarely enter. Right away, a guy walks up, hands us each a coupon and says it's worth 50 percent of any single item the following weekend. We started looking around, and sure enough, they had two big-ass Camelbaks with nebulous acronyms.

So last Saturday, I was there with a coupon in my hand when they opened the door at 10 a.m., and five minutes later I was walking out with a H.A.W.G. that cost only 50 bucks.

I almost felt like I was shoplifting. It was a disturbingly good feeling.
Posted by Tim at 8:10 PM

I just ordered a stem, seat post and handle bars from Nashbar. Nice stuff (Oval Concepts, Easton) for my MTB and only $94.00 w/ free shipping. I had budgeted $175.00 for the project. Cheap is nice.

That would be:
Medium to Ultra Long Endeavors & Holds A lot of Water and Gear (or something like that.)

I like buying last year's stuff too. I almost always buy my bikes or frames that way.

I see in your future a race called Susitna something. Um yes, thats it... Susitna 100. Glad you have decided to go for it. I'm gonna' tell everyone Tim W. is doing the Susitna 100 this season. Good for you dude!

No way that'll work, Leonard. Everyone who knows me is aware that I'm far too sensible to sacrifice my toes in that torture-fest.

Besides, the light batteries don't burn that long.

Tim,
What kind of new bars did you get? Also, what hubs do you run?

The bar is a Ritchey Pro. I was looking for a bit of a riser without much sweep.

I can't remember model numbers, but I'm running a Shimano Deore hub in the rear, with a Surly hub up front.

I probably could shave weight with more selective parts choices, but the way I see it, the thing's a tractor, not a Corvette.