Throw your hands up and shout!

When I got off the trail yesterday and picked up a cell signal, I found a voicemail from a nice guy named Kevi 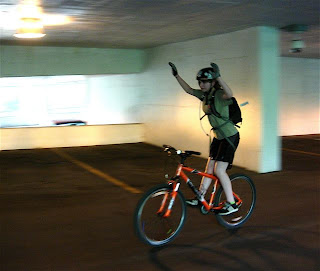 n, who said he had my missing camera.

His daughter had spotted it from the car as her mom was driving down a street near the trailhead where I left it on the roof of my 4Runner.

Now I have my camera and the photos I had taken right before I lost it, such as this one of my daughter doing her hands-free, standing-up gag. I also get to keep tormenting my friends by shooting pics during our rides.

Kevin declined the reward I had offered on Craigslist, so after I got home I mailed him a Kaladi Brothers gift card with a note telling him to go buy a few complicated coffees for himself, and a few hot chocolates for his sharp-eyed daughter.

That is great! There are still good people out there. How did they find your name? Please share your identification method, I'd like to do the same for my camera and my wife's.

I have one of those little machines that makes white tape labels, so I have my name and cell number on the camera body. In this case, the people who found the camera overlooked the label until they got on the lost/found portion of craigslist and saw my post offering a reward.

In the post, I said anyone who found the camera would find my name and number on it, so they pulled the camera back out of its pouch and looked again. If it hadn't been for the ad, they probably wouldn't have found the label for several more days -- after I'd purchased another camera, no doubt.

I plan to add another label to the camera body in a more obvious location.

I highly recommend those little label makers by the way. The tape labels are really durable. The one on my camera looks new despite being two years old. The model I have allows me to use several point sizes, so it's easy to make small labels for little things like cameras.

(It's also a great way to put your name and number on the steerer tube of your bike, in case it's ever stolen.)