On the road again

A few weeks back, I sold three old bikes while clearing out some space and improving my bike-storage strategy. One of them 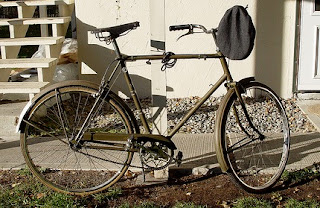 was the 1970 Raleigh Sport, an English 3-speed that my dad purchased and rode through the brief window between retirement and cancer.

I pulled this thing out of my mother's attic a few years after Dad died, and I hauled it home to New Mexico. Then I moved it all the way to Alaska when we came up here 11 years ago. At some point after we bought our house in Anchorage, I finally got around to mostly disassembling the thing before all my good intentions fell apart and the restoration project stalled. The frame spent the past few years hanging from a hook in my backyard shed, while most of the parts collected dust on a shelf.

Bikes should be ridden, not stored in cardboard boxes, so I finally decided 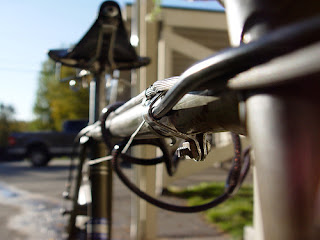 to admit to myself that I'd probably never finish the damned thing. I sold it to a guy named Zach, who quickly turned the pile of parts back into a functional bicycle while sending me updates via e-mails and Gmail chats. Then he was was nice enough to share these pics of the bike after it was rebuilt.

Dad picked up this thing at a yard sale in Arizona, so I don't know much of its history. But at 37 years old, it's still chugging along and making its rider happy. (Zach will probably be even happier if he succeeds in softening up that old, dried-out Brooks saddle.)

It was a fairly cheap, utilitarian bike in its day. Countless versions of it are still being ridden around the world. How many of today's cheap bikes do you think will still be in use 37 years from now?

Email ThisBlogThis!Share to TwitterShare to FacebookShare to Pinterest
Labels: Raleigh

Having fun with it otherwise. I'll have legs of steel soon enough.