I don’t think a bike has really settled in at my house until it has been around long enough to take a vacation. The roadie is rap 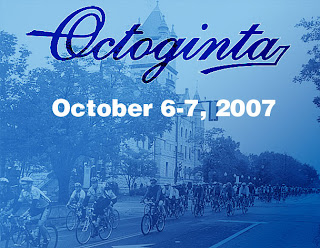 idly approaching its first anniversary and hasn’t left Alaska yet, but that’s about to change.

In less than two weeks, I’m taking it down south for a week of riding with my younger brother. He still has nice weather and is riding to stay in shape. He's out there gettin' stronger while I watch my gut grow. Here in Alaska, it’s getting dark earlier and raining a lot, and I’m barely riding. I’m even driving my ass to work every day because of obligations that are temporarily screwing up the bike-commuting option.

My brother and I try to meet somewhere every couple of years so we can spend a few days riding together. Sometimes I put the hurt on him, sometimes he puts the hurt on me. I think he’s looking to tip the balance in his favor.

Our first day will be devoted to mellow fun at the annual Octoginta ride in Lawrence, Kansas. I’m looking forward to a mass ride in Lawrence, which I haven’t seen in years. I grew up as a Jayhawks fan and have fond memories of spending weekends on the KU campus while visiting older siblings who went to college there.

When we were in high school, a buddy and I once got a little help from his older sister's boyfriend and poached a vacant KU dorm room for a night to avoid the two-hour drive home after a rip-roaring ZZ Top concert. (This was during the “World Wide Texas Tour” in 1977, when the bearded brethren were still a country/blues band with soul—quite a few years before they bought fuzzy guitars and started making silly MTV videos.)

The only thing I can’t figure out about this trip is what the hell “Octoginta” means. I thought my brother would know because he lives nearby in Kansas City. He said he’s not sure, but he thinks he recently treated a case of it in the hospital where he works.

I forgot to ask where the rash appears. Maybe I'll pack some extra chamois cream.
Posted by Tim at 8:30 PM