I was preparing to go to dinner at Ken and Heather's place Saturday evening, but I was scratching my head over one of life's most vexing dilemmas: how to transport 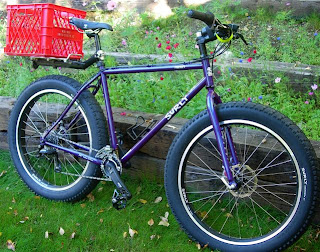 two six-packs of bottled beer and four big chunks of halibut without my BOB trailer, which someone recently borrowed.

Even if I'd had the BOB, I was really in the mood to ride my Pugsley, which is way too fat to accommodate the trailer's fork. Driving wasn't a good option. My friends live a little less than a mile away, so I'd walk there and back before I'd go beerless for a couple of hours just so I could drive home.

Then I remembered that I had all the parts required to assemble a great American classic: the rack-mounted milk-crate cargo hauler. Give a resourceful man a purloined milk crate and a fistful of zip ties, and he can move damned near anything. It might arrive in more pieces that it's supposed to be in, but he can gawl-darn move it.

These contraptions are one of the greatest utilitarian accessories in the history of bicycling.

Over the decades since some some dirt-bag student carried out the first covert crate-snatching mission in the hostile territory of a supermarket's back lot and safely delivered the package to the extraction zone of his front porch, these things have hauled countless loads of beer to college dorms and apartments. Sure, they've also held TVs and supported bookshelves, but who really cares? It's hauling beer that made 'em famous.

So I ran out to the backyard shed and grabbed a crate that I boosted from a grocery-store alley during my reckless youth—27 years ago, to be exact. That's the other great thing about milk crates ... they never freakin' wear out!

Anyway, I went back into the garage, clamped a rack around the seatpost of my Pugs, and zip-tied that milk crate on good and tight. Next thing I knew, I had 'er loaded up with beer and dead fish, and was standing in the driveway trying to figure out how I was gonna get my 44-year-old leg over a bike that was starting to look like the Clampetts' vee-hickle when they loaded up the truck and moved to Beverly. Hills, that is.

The act of mounting the bike wasn't exactly poetry in motion, but what the hell—I was off to a party with a full trunk, a smile on my face and no need for a driver's license.

I didn't care if the car-imprisoned civilians stared at my fat-ass tires or the junk in my trunk. I was rollin' a modern-day classic, and cold beer bottles were clinkin' on my six.
Posted by Tim at 8:45 PM

I thought that was a pretty good blog entry.

Funny...I still have two milk crates from the college dorm days. They started off as furniture, but then later were used to haul guitar gear. Later in life they hauled tie downs and 2 stroke oil for my motorcycles. They make good garage seats and step stools. And they're in just as good as shape as they were nearly 20 years ago!

Another plus is the statute of limitations has probably also expired on the thievery of those crates by now...

I had two milk crates in college that I used to keep some of my record collection in while my monster speakers sat on top of them. I still have those crates. One has in the shed out back and one in the basement, both filled with junk I can't seem to part with. They are also ready to be called into duty anytime I need them to haul stuff.

BTW, is this you?

That's my uncle. He's my role model but has poor taste in beer.

That's one of the nicest 1/2 rack delivery systems I've ever seen. Nice job on being innovative with milk crates. It reminds me of when I first started commuting in the winter and didn't have very good gloves and split a couple of plastic 1/2 gallon milk, taped them to my handle bars and was quite content for the remainder of the winter. People would say "Nice hand covers! Where'd you get 'em?" I'd always give them a good reply something like, "Safeway Super Store"

You Pugs is a little nicer than my '93 HardRock I pulled out of the trash but mine is a singlespeed so I think that gives me like 67.8 more cool points.

So I think we are even. Let's drink some beer sometime!!

also funny..I look around my living room and lo-and-behold...milk crates.I`ve used them over the years for a lot a different things, to store stuff,to hold stuff ,etc. My wife is always buggin` me to get rid of them,but I always tell her "Oh I can use it for something.." Those things do seem to last forever!