My job occasionally takes me to strange places. On Wednesday, I found myself shooting photos aboard a large ship crewed by Italians headed for Asia. The captain was a nice guy from a small town near Naples. He welcomed me aboard and was very accommodating, but I got the impression he couldn't quite figure me out.

When evening came around, he invited me to dinner in the officer's mess. We made small talk as he led me there and showed me parts of the ship along the way. As we 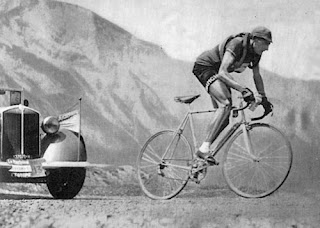 ate, we discussed everything from his hometown to the hard, lonely life of a mariner to futbol and our families. Eventually, cycling came up because ... well, because I was involved in the conversation, and I'm too myopic and socially dysfunctional to have a conversation that doesn't eventually involve at least one bicycle.

He began to tell me about a big bike race held in his country and I said, "Of course! the Giro d'Italia!" His smile broadened instantly. The names of great old racers started popping up and as soon as he realized I could discuss Coppi, Pantani, Anquetil and Merckx, an already nice guy relaxed and opened up even more. I could sense that he enjoyed finding an American whose interests range beyond the NFL (actually, mine don't even include the NFL).

After dinner, we stood on the bridge for a long time as he showed me charts and his usual route to Japan, and told me about his ship's infrastructure, and the storms and other hazards along the Great Circle Route.

When midnight rolled around, it was time for me and another guy to leave the ship via a smaller boat that was pulling alongside so that we could climb down and jump aboard while the bigger vessel continued to steam through the darkness. I thanked the captain for his hospitality and he replied, "Anytime! Anytime!" This is a guy responsible for transporting dangerous cargo, so he doesn't get a lot of visitors—especially in these paranoid, post-9/11 days—but he sounded like he'd welcome me aboard any time I asked for a lift on one of his regular runs.

As we left the bridge, I shook his hand one final time as he said, "See you next time. Well, not next time, but sometime when you want to come again."

Even though he was a very friendly guy, I don't think he would have warmed up to me as much if the only sports conversation I could have was about the Yankees being six games behind the 49ers, or whatever the hell it is most ESPN viewers talk about.

I know it'll never happen, but I sort of liked the idea of climbing aboard and spending a few days on the run to Japan while hanging out with guys from the land of Cipollini.
Posted by Tim at 9:03 PM

Nice story. Funny how we can connect with other people when we get down to basics. Good stuff.

Now, let's remember that there are some people out there who watch the le tour (or giro or...), belong to local cycling organizations, and read your blog, who also follow mainstream sports... let's not go all reverse discrimination here. Not all American Sports fans are knuckle-draggers. ;-)

The nice thing to see was someone from Europe seeing that some people in regular walks of life from the US are keyed into international sports that aren't ones the US dominates (eg basketball). Hopefully, he'll pass this along to his buddies - these Americans... maybe the are as nice as we thought after WWII.

I hope to get back to Europe after my tours up here...mostly for the travel but also the bike scene.

I enjoyed doing local races in Italy, Germany, Austria & Slovenia over there. Five to ten Euro and you raced with about 100 people, got trophies, door prizes and a pasta feed at the end. Everyone was surprised when our team showed up in matching jerseys and usually placed a couple guys in top 10.