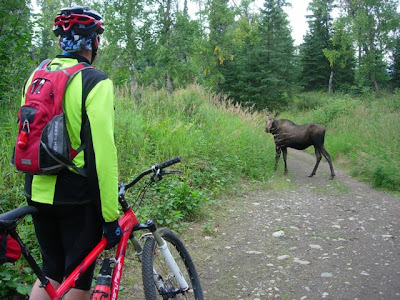 How many misadventures in mountain biking have started with the words, "You think you could ride up that?"

Maura asked that question this afternoon, and John got into the idea of testing the limits of traction. Then a bunch of synapses in my brain stopped firing and the idea started to sound sort of cool. Next thing I knew, I was flopping and rolling down a hill with my legs wrapped around the frame of my bike.

Ride up it? Hell, I couldn't ride down it.

Ah, hell, summer's on the way out and the door's hittin' it on the ass. What good is a Labor Day weekend if you can't bag a ride and score a few new bruises before the temperatures start falling?

Fortunately, we also survived an encounter with the moose pictured above. Sometimes, the big critters just don't want to cooperate and get well off the trail. After several minutes of "nudging" our patience was running out and John squeaked by, leaving an increasingly nervous moose still in our way.

Finally, a narrow window of opportunity arose and Maura and I made our move by counting to three and gettin' the hell outta Dodge.

Come to think of it, I'm pretty sure a few misadventures have also started with the words, "One, two, three, GO!"
Posted by Tim at 9:02 PM