A matter of perspective

A former neighbor and I work in the same building, and I ran into him a couple of days ago as I was arriving on my bike. He climbed out of his pickup and made a joke about how he was going to tell my life-insurance company that 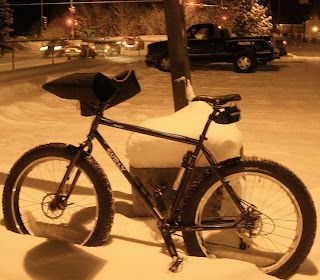 I ride in winter. Then he noticed the wheels and tires on my Pugsley.

He stepped closer and started checking out the bike and asking a questions. He said he had recently seen a fat bike when he was in a local shop. I know he rides in the summertime and uses an indoor trainer in winter, so I rattled of a couple of bits of information about the bike and how great it is for winter riding.

As he continued toward the door, he said the Pugsley looked like fun, but that he couldn’t justify the expense for something he’d use “on a lark” a couple of times a year.

I tried to tell him he might be surprised. Winter riding is certainly more fun than spinning on a trainer for six months. Then I told him my fat bike was one of the best investments I’ve ever made.

He laughed and said, “I have a couple of two-thousand-dollar bikes, too. I just don’t call them ‘investments.’”

Tim, I just discovered your blog! I'm loving it! I use to live in Fairbanks and rode a bmx around all winter. I was 20, what can I say. This is my first winter commuting here in Columbus, OH. I spend most of the rides, wondering, out loud, how the hell I ever survived in Fairbanks!! lol (tshirts and shorts when it hit 20!) I'm loving the blog, and I am loving the winter riding! It is all about perspective. And, if my coworkers think I am some kind of weird ass bike geek, then I am honored!! Thank you! How's your jaw?

Thanks, Jazz. I also wonder how you survived Fairbanks. I stay down here on the coast, where we generally avoid the obscenely low temps like -40.

The jaw is mostly back to normal. Still a little stiffness in the back of my neck, and I can't feel the right side of my lower lip very well, but I'm getting used to it.

At least my legs are working, so I can ride just fine.

Keep lovin' that winter commuting. Why ride the hamster wheel when you can get outside?

Great Blog Tim! Love the picture of the pugsly...As Jazz said, it's all a matter of perspective - I call my bikes an investment too- But no matter what, they are tools and are in the garage to be used and enjoyed!