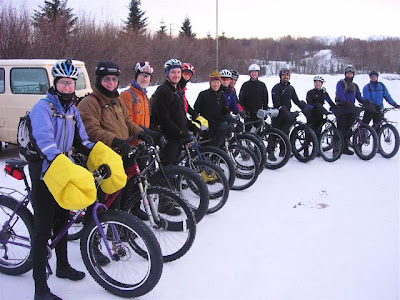 Last weekend when I posted an online notice for a New Year's Day ride, I told a friend it was a ride that would “thin the herd.” How many people were likely to show up at 11 a.m. on the morning after the bigges 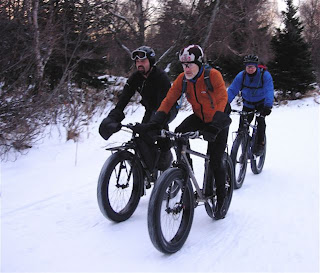 t party night of the year?

I was guessing about five.

But one should never underestimate how much more fun it is to ride a bike than to stay up guzzling champagne on New Year’s Eve. Or how much cooler mountain bikers are than loud drunks. (Trust me. I’ve been both).

We left Kincaid Park with 13 people Tuesday morning to ride the Frosty Bottom 50 course in preparation for this Saturday's race. Along the way, we picked up riders who had opted to pedal from home and intercept us on the trails. We even absorbed two riders we’d never met—Marc and Gayle just saw us and decided to join the mob that was growing to 17 or 18 riders.

And for once, Nor

dic skiers instinctively got out of our way. Some of them even abandoned their usual disapproving scowls and stood back with smiles on their faces as they watched us roll by on more fat bikes than most people have ever seen at one time.

For several hours, it was a rolling, evolving fat-tire peloton as riders came and went.

It was a beautiful thing.
Posted by Tim at 9:10 PM

Frankly, as a mountain biker, that's more fat bikes than I've ever seen in one group. Granted, I don't live in Alaska, but if it's any cancellation, it's 8degF where I'm writing from at the moment. :-)

It's a warm 29degrees here in Georgia w/no snow in sight. You're tougher than I am, and more dedicated! Looks like a great ride and the perfect way to start 2008!