I'll be spending the next few days eating ibuprofen and drying out rain-soaked camping gear as I sort through all the mental detritus of the 24 Hours of Matanuska. Being a guy who abandoned in pain after seven and a half hours, one of the things that’ll stick with me is the tenacity of some really tough racers. There were many, and I got pics of only a few: 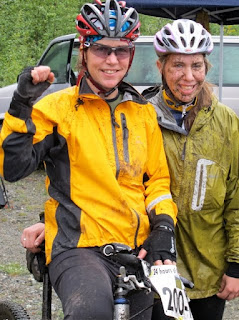 Team Davis. With no competition remaining in the race by Sunday morning, they had their victory in the bag, and could have gone home for hot showers and sleep. Instead, they kept going out for laps on a course so slippery that even the best racers were reduced to pushing up the slimy hills. Their husband and dad, Mark, had fought off cramps for hours to rack up 10 laps in the 12-hour solo division Saturday night. 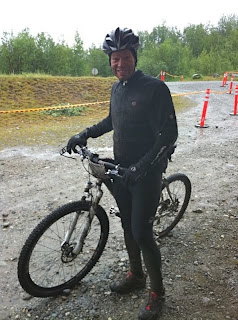 Tony B., who rang up 18 laps in the 24-hour solo division. I watched him roll out in the rain at 7:30 a.m. with a 26-inch wheel that had just been thrown on the back of his 29er as an emergency repair just to keep the thing rolling. 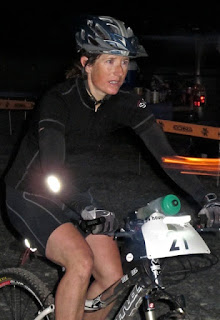 Jenny H. wanted 10 laps in the 12-hour solo division. She got them by cruising by the timer’s tent at 11:30 p.m. and going out for a final two hours of suffering. When she finished seconds after this photo was taken, she couldn’t even drink a beer. That’s what I call giving until it hurts. 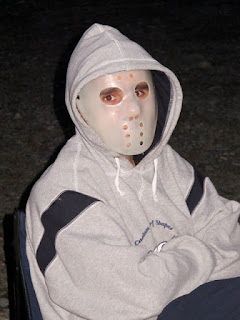 The Grouch—and unofficial race mascot—who survived the 12-hour race on a fully rigid bike, but had the good sense to bring a spare, so he could cannibalize a front wheel after destroying the one he started with. (As odd as this blog already was, publishing a picture of a guy who wears a hockey mask and cannibalizes things might be a new level of strangeness.) 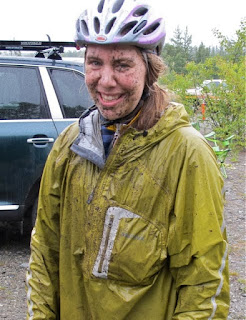 Petra proved she's a certifiable badass just by being there. Racing like one was just a bonus.

Kudos to everyone who rode. (Including the drunk dude who did it in flip-flops in the middle of the night.)
Posted by Tim at 7:57 PM

As miserable as it looks to have been I am very sorry my camera and I missed this event. Congrats to all who even participated and huge kuddo’s to those who finished!
Thanks for the photo’s.
Next year having this race weekend off will be understood before I even take the job-

That is truly incredible. Just to show my ignorance, what distance was a 'lap'?

Andy, depending on who's measuring the course, each lap is somewhere between 10 and 11 miles.