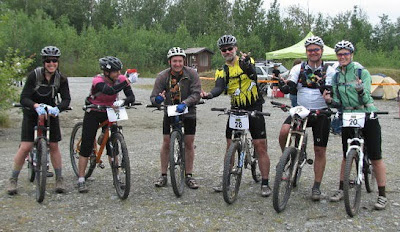 The pre-race flip off.
(Photo by Maura)

Quitting was about the only smart thing I did at last weekend’s 12-hour race. My goal was to ride from noon to midnight and determine how my mind and body would hold up in such an event. But at 7:30 p.m., with my knees throbbing in pain, I rolled up to the timer’s tent and said, “Check me in. I’m think I’m done.”

I spent the rest of the night blaming my creaky, aging knees, but that probably wasn’t fair. My creaky brain played a big role in ending my race early.

Exhibit A: About a half-hour before the start, during a casual conversation with friends, I set a goal of riding eight laps on the 11-mile course. This was a dumb mistake. I wasn’t fully familiar with the terrain, and setting such a goal was in direct conflict with my original plan to simply ride smart and see how far I could go.

Exhibit B: I forgot the meaning of “riding smart.” I always warm up slowly, so I felt good about keeping my first-lap pace in check. Plenty of riders passed me as they warmed up, and I was proud of myself for resisting the temptation to chase. But then I got stupid. After one lap, I started doing math—never a good idea, in my case—and calculating what kind of split times I’d need to rack up eight laps before midnight. I ramped up my pace to turn a faster second lap. Bad move.

I achieved the pace I wanted, but not the one I could sustain for 12 hours. Shortly before 6 p.m., I finished my fourth lap but knew it was time to adjust my goal. During my next lap, the goal became simple—stop doing damage.

As The Grouch later pointed out, the 24 Hours of Matanuska course contains a lot of hills that are very steep, yet short enough to tempt riders into powering over them with gear combinations that are too high. That’s hard on knees, and I pedaled right into the trap. Gearing down would have cost me the eight-lap goal, but so what? If I’d used my head, there’s a good chance my body would have held up for two more laps, which would have put me at a respectable seven.

Ultimately, though, the race answered a bigger question that has lingered in my mind since the depths of last winter: whether I should enter this year’s Soggy Bottom 100. With 7 hours and more than 50 miles behind me, the thought of riding another 50—even with good knees—held zero appeal.

I love doing the rides most mountain bikers call all-day epics. But for me, the line ends somewhere around six hours and 50 miles, depending on the terrain.

Email ThisBlogThis!Share to TwitterShare to FacebookShare to Pinterest
Labels: Race, the finger

A man's got to know his limitations. - Clint Eastwood "Dirty Harry"

50 miles with burgers and beers is fine by me.