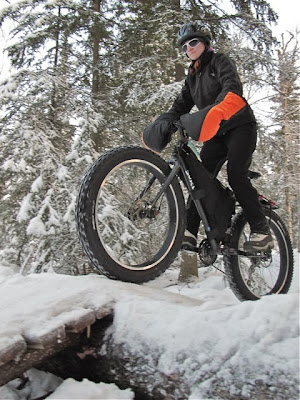 Who says teenagers suck?
There’s just nothing like a string of fat bikes lighting up the woods on a Saturday night. We were overdue for a Frigid Bits event, so Carlos thought up a new course from a new star 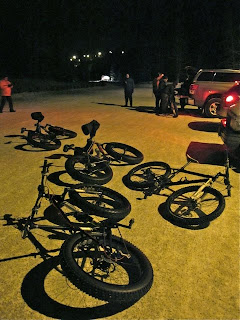 ting point, and I dragged my ass out to join the fun. After weeks of simmering in the mid-winter doldrums of too much food, too much booze and too little riding, it was just what I needed.

Our social-ride route was so fun, I went back and repeated much of it on Sunday with my daughter, who has been sampling fat bikes borrowed from friends. Now she’s wanting a new bike. It looks like this could get a tad expensive, but who cares? Not every parent has a 16-year-old kid who wants to go ride with them.

I’ve been considering a new ride myself, so I’m sniffing around the shops checking out frames and rims. My Surly’s a damn fun bike, but a first-generation Pugsley is starting feel a bit dated, given the fat-bike refinements we’ve been seeing over the past two or three years.

Still, I’ve always been kind of proud to ride the original purple. When the time comes, I'll hate to see it go.
Posted by Tim at 10:24 PM

Great ride Saturday Night!!! Thanks for letting leading us into the night!

Anyway, I've been feeling the same itch to upgrade...but can't seem to let go of the purple.

Great photo-
and glad to hear about the daughters interest, these days its a rare thing if you can find a young adult that is interested in something besides stareing at one type of screen or another. Kuddo's to both of you-